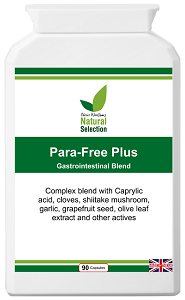 Para Free Plus is a highly effective all-herbal parasite killer that will deal with all common parasites across a two month period; you can take it with wormwood.

Chris had his first parasite ‘come out’ in his body when he was 42.  He’d actually been infected in Morocco when he was 28. But then, according to Maryland Medical School, a parasite can lie dormant in your body for 20 years or more.  Chris removed it very successfully with a now defunct product called Parafree, which was a simple mix of highly effective herbs.

Since he has lived in Thailand he has picked up 4 different parasites. It’s not unusual. They’re on your salads, your ice, in the shower water, in meats, fish and they are very hard to avoid. At a conference where he was speaking he told the audience of doctors that he thought 70 per cent of people in the UK and USA almost certainly have some sort of parasite infection. No one disagreed.

Para Free Plus – 3 in one action

So Chris set out to launch a 3-in-one parasite killer that also killed yeasts, and was a complete colon cleanse.

He also wanted to avoid artemisinin (sweet wormwood) as parasite mixes are not allowed to carry a full dose by European law. With Para-Free Plus, according to the severity of the problem, patients could also add a specific dose of artemisinin.

Chris also uses a preventative dose of Para-Free Plus when travelling, as do many people in Japan.

By now, you probably realise that he launched this product for himself, because it didn’t exist and he wanted it!! And it works.