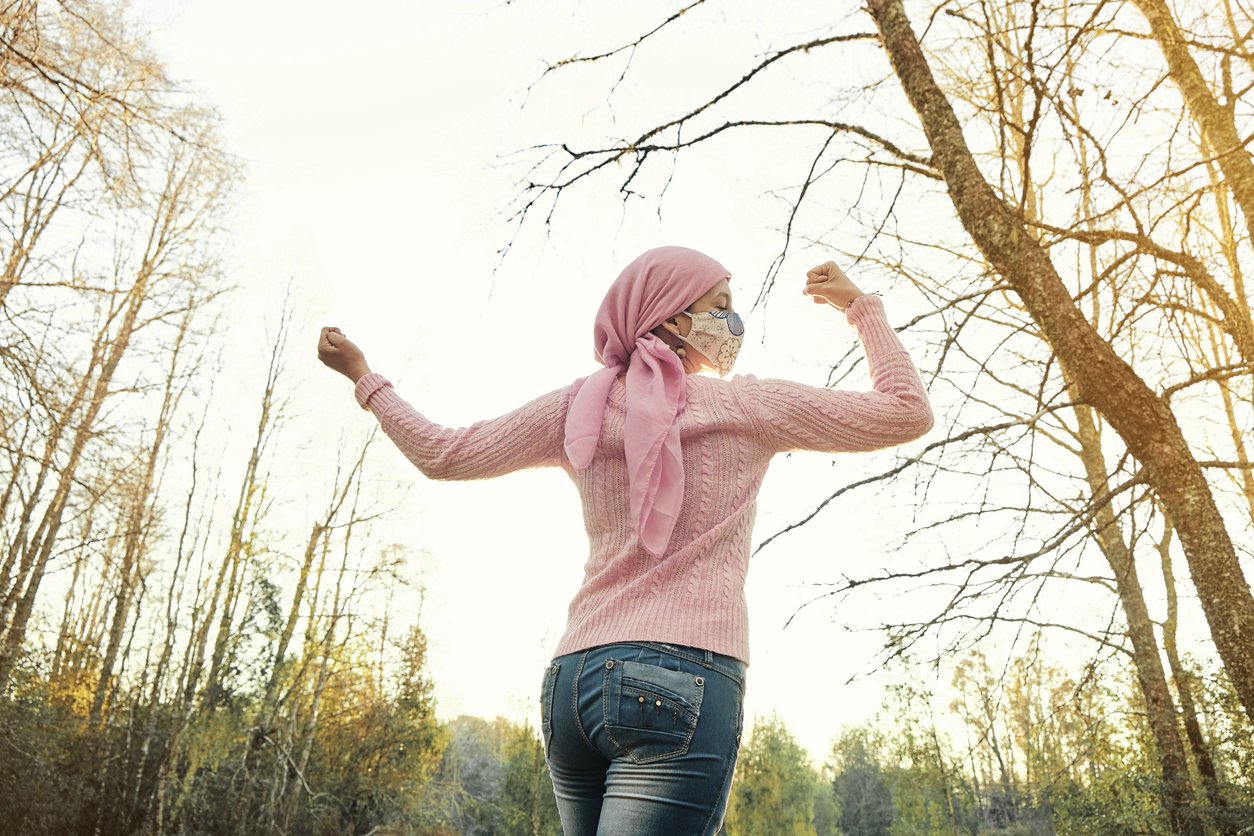 It is imperative that you have good blood levels of oxygen, with a saturation level of 99 or 100 both to prevent and fight cancer. Here we tell you why, and how?

Your blood itself can dissolve oxygen, but where the red blood cells carry haemoglobin it increases that oxygenation 70-fold. Each central iron unit in the protein haemoglobin can carry four oxygen molecules and this is the prime method for transporting oxygen from your lungs around your body to your tissues, ultimately to power your cells. Aerobic respiration using oxygen in your healthy cells provides energy via oxidative phosphorylation to power your cells and a healthy person has 12 to 20 gm of haemoglobin per 100 ml of blood.

Let’s talk a little about anaemia because many cancer patients experience it.

Being anaemic is where your organs don’t receive enough oxygen to do their jobs. This can occur because

Most usually, anasemia occurs where there are not enough healthy red cells to carry oxygen to your organs. Low red blood cell counts are synonymous with low haemoglobin..

Some cancers can cause low haemoglobin – notably ones that damage the bone marrow such as lymphoma, leukaemia and myeloma.

Bleeding as a result of cancer or its treatment may cause anaemia. But so can a woman’s monthly cycle.

Also, cancer patients may not want to eat or choose to ‘go vegan’ and this can lead to nutritional deficiencies and lower red blood counts.

Another drug-related cause is blood thinners.

In serious cases of anaemia, doctors may give you blood transfusions or injections of inorganic iron.

Diet is usually a significant help.

Of course, you can eat a steak (preferably grass fed, organic). Animal and seafood protein provides haem iron, and about 30 per cent is readily absorbed but you may not regard eating meat and shellfish as something for you.

Best is to take a plant iron supplement, preferably alongside B vitamins that help it assimilate, because plant iron is non-haem iron and only 10 per cent is readily absorbed. Floradix, which you can usually buy in the local chemist’s, is such an iron supplement – it is ferric iron, a form not particularly liked by cancer cells according to expert Dr. Singh of Washington State Medical School, Seattle. Vitamin C also helps absorption.

Long-term exercise can improve oxygenation and build red cell volumes. That’s the positive. But at the outset it may be dangerous. Exercising when you have anaemia can result in an irregular heart beat. Since you need more oxygen in your tissues it can result in more lactic acid being made and acidosis. Take it gently, and if you get light headed, dizzy or have chest pains, stop immediately.

Why is oxygen so important?

First, your cells cannot be healthy, and you cannot be healthy, without sufficient oxygen in your body; you literally lose power. Fatigue is common with anaemia. You may also feel weak, dizzy and cold. It can affect your nails and cause hair loss. You may have pale skin and/or whooshing noises in your ears.

There is research that low localized oxygen can cause epigenetic changes around healthy cells and lead to cancer formation.

There is also research that shows if your blood oxygen levels fall, your cancer will become more aggressive.

The Chameleo Study looked at women with breast cancer who had had a lumpectomy. The surgeon in removing the lump could remove adjacent blood vessels leaving poor oxygenation of the area and making localised recurrence more likely. The researchers recommended women using Hyperbaric Oxygen to force oxygen into the tissues.

Cancer cells use oxygen (the Warburg effect) to make their energy by oxidative glycolysis, not phosphorylation. They are burning glucose in their cytoplasm, not their mitochondria. It is called cellular metabolism, not mitochondrial metabolism, and is very inefficient. In fact, cancer cells want to grow fast and this means hijacking the body systems to provide more nutrients. And the tumour growth means a shortage of oxygen and so most cancer cells grow in a low oxygen environment. Despite Warburg’s famous discovery, cancer cells usually live and thrive in low oxygen conditions.

Healthy people need just the right amount of oxygen for their cells. Not too much, not too little. And they have an inbuilt sensor which adjusts cell oxygenation to their needs. For example if they are running at high altitudes they will have thinner blood yet require more oxygen. This is accomplished by factors called HIF – hypoxia (low oxygen) inducible factors.

Cancer cells steal these HIFs. And although it is not fully understood, they use the hypoxia and have adapted it.

Hypoxia goes hand-in-hand with malignancy. Cancer cells use hypoxia and the HIFs to prompt angiogenesis, metastasis and a cell quiescence that results in drug resistance. Cancer has adapted to and likes low oxygen conditions and localised low blood oxygen.

Your oncologist will measure your Haemoglobin and your red blood cell levels because he doesn’t want them to be too low – you’d be ill and he couldn’t use his drugs on you.

Doctors sometimes measure your overall ‘sats’ – your blood oxygen saturation – you should be 99 or 100%.They don’t look at this figure as much nowadays. They should. I get quite a few people who are well below this. Ladies with breast cancer down around 92 or 93; men with prostate cancer at 85 or 86, and kidney cancer seems the worst with patients even falling to the mid-70s.

I also worry about localised oxygen levels – in the microenvironment of the your cells –  much as the CHAMELEO project researchers said. Another contributor to low localized oxygen would be yeasts like Candida which like low oxygen conditions and make them worse.

I have the same view as the CHAMELEO researchers, who recommended having Hyperbaric Oxygen to help force oxygen into the tissues. In the UK you can call the Multiple Sclerosis Society and ask them to tell you the nearest chamber to where you live. (But please check with your doctor if you have any lung problems.

Hyperbaric Oxygen was invented for divers who came up too fast and this produced nitrogen bubbles in their blood which could kill them. It’s called ‘the bends’. They were immediately placed in a room with an appropriate pressure of oxygen for the depth from which they rose.

Then these chambers were found to be very healing for burns. Soldiers and firemen used them. Next, it was internal injuries and healing. And HBOT, (Hyperbaric Oxygen Therapy) has been shown to help people with MS too.

Unfortunately, back in 2003, a couple of American doctors claimed that they had given their patients HBOT and it spread the cancer. At this point I don’t know whether to laugh or cry. Suffice it to say, that neither doctor presented their research along with their claims. Many oncologists have heard of this research and tell patients not to have HBOT but it is nonsense.

Fortunately, two lady researchers decided to look at every research study since the 2003 claims. In the 90 studies they reviewed they found the opposite to be true.

Exercise as an alternative

There was research conducted in Arizona with people riding bicycles for three hours then going off to have their treatment. Same result. The treatment was more effective with less side-effects.

Of course, if you are not seriously anaemic, exercise is excellent. As a personal trainer, my general suggestion, if you have been low on exercise for a few years, would be ‘speed walking’. The target is 45-60 minutes per day with a minimum of 20 minutes out of breath; 4 times per week. You could measure out an hour’s walk, preferably with a slight incline after 20 minutes. And try to do it every other day, getting a little faster with each trip. Speed walking is great. I can’t kill you, everyone self-regulates. But after just a couple of weeks of picking the pace up a little each trip, you will be amazed at the benefits.

You don’t have ‘to go for the burn’. (Prostate cancer patients might be an exception – vigorous exercise is their aim). For the majority of people fighting cancer, we have research that shows that even modest amounts of exercise can improve cancer survival times.

Next you can juice or make a smoothie. Is one better than the other? We have no hard research.  We suggest ‘Green vegetable juicing’ (for you, kale, broccoli, watercress, parsley, celery, cucumber, chlorella powder, real sea kelp (for iodine), wheatgrass, sprouting seeds, plus some beetroot, carrot and maybe an apple to sweeten) will help oxygenate the blood, reduce oestrogen, boost gut bacteria, and reduce drivers like epinephrine levels (from stress).

If you have a fully functioning microbiome you can make this organic and take Selenium (200 mcg) and Zeolite for 3 months if you feel you need a detox. But you cannot expect to fully detox without the help of your little friends in your gut.

Never put fruit (apart from perhaps a green apple) in a juice. (100 ml of berry juice or smoothie is 10.3 gm sugar; a Coca Cola is 10.6 gm). Some people might argue that the benefits of the berries outweigh the negatives of the sugar, but I really don’t think so.

Crushed flaxseed is good too for improving blood oxygen. Use 1 heaped tablespoon a day. Your gut bacteria will like the fibre.

I always suggest consuming plenty of ginger in the juices (5-10 gm, per pint of juice) because it kills quite obscure microbes, attacks a cancer’s blood supply; and cuts blood fat, blood glucose and inflammation – all drivers of cancer.

Other areas worth a mention because people use them:

Ozone Therapy – frankly, although very popular in private clinics, there is less research, and it costs much more than HBOT. It will deliver increases in oxygen in the blood stream, and if used rectally can kill parasites and pathogens.

Meditation – there is research evidence that meditation can calm the blood flow and increase blood oxygenation through its effects on hormones. It has been shown to regulate stress hormones.

i) Richie Bostock – Bostock, aka The Breath guy, is based in London and talks of how breathing techniques have moved on from spiritual gurus practicing meditation to current athletes and competitive sportsmen, and even Navy Seals. Claims are made that when you change your breathing to make deeper rhythmical inhalations and exhalations, you can increase energy levels, improve cardiovascular health, eliminate toxins, improve sleep, fuel cells and reduce stress and anxiety. Breathing techniques are enery therapy and meditation in one.

iii) Wim Hof – Hof is a Dutchman who holds 21 Guinness World Records, like sitting in an ice tank for 112 minutes and climbing Kilimanjaro just wearing shorts! The Wim Hof method uses breathing exercises dubbed ‘controlled hyperventilation’ to elicit a stress response. Again, it is deep inhalations and exhalations, but also involves holding your breath for quite long periods. He argues that this is proven to lead to more resilience and control in everyday life.

Liquid Oxygen Drops – people sell little bottles containing Oxygen, seaweed and immune boosters. I quote – “The unique structure oxygenates and cleans the cells, feeding and tuning up all the body’s systems throughout the day. It supports the reduction of free radicals”

And the EU-approved research for these claims is where, exactly?