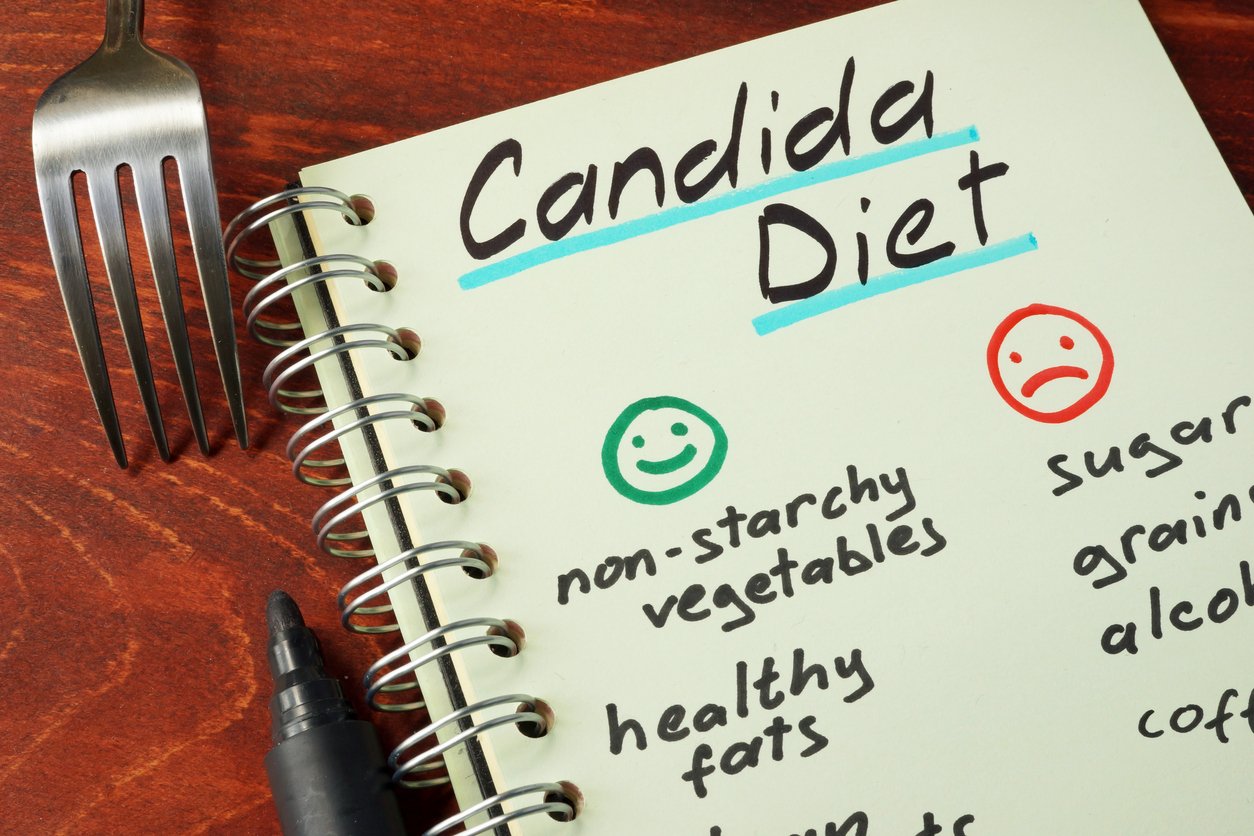 A diet to beat Candida:

Do you have a sweet tooth? A craving for chocolate? Mouth ulcers? If you’re a woman – have you had thrush or cystitis? Or bloating, flatulence and yellow toe nails, if a man. The problem? Chances are you have, like 70% of the British population, an excess of common yeasts or Candida albicans in your gut. And below, we tell you exactly how to deal with it!

The basic reason is that your gut microbiome has a problem and the gut bacteria are out of balance. The friendly bacteria have suffered a loss in numbers and diversity.

So why the problem?

Your friendly bacteria are very sensitive. While a three week course of antibiotics may fail to kill a nasty pathogen, it will have laid waste to the good bacteria. So, have you had a series or two of antibiotics in the last five or six years? Or have you been through surgery, or on a course of drugs? Alternatively, did you have a bad stomach upset when you were on holiday, which lasted a week or two? (If you were ill on holiday this could be a parasite.) Other things don’t help – chlorine in your water, antibiotics in your chicken breast, smoking and stress – all of these damage the good bacteria.

See how easy it is to weaken the good guys and feed the yeasts.

There is one important issue you need to understand. Your good bacteria are your first line of defence. At night while you sleep, they feed on the yeasts and microbes that entered your body with the food you consumed. In fact candida albicans is their very favourite food – they consume two to two and a half pounds a night. They keep you yeast-free.

It can get worse

Unfortunately, yeasts are like mushrooms – they have roots. And these roots can punch holes in your gut wall. These holes cause ‘leaky gut’. Yeasts can pass through the holes. But they are anaerobes and can move round the body and colonise certain areas,  causing oxygen depletion. They can also stick to cell membranes and block important receptor sites where, for examples, hormones regulate the cell. if those receptors are blocked, simple body systems may fail.

Large molecules can cross the gut lining too. In the blood stream they can be toxins causing inflammation, or an immune response. Or they can just cause ‘poisoning’ leaving you chronically tired.

Both men and women can have an excess of yeasts.

How do you tackle the problem?

There is more below, but basically you need to employ a diet that is NOT yeast friendly.

You should take probiotics (acidophilus and bifidobacteria) but you must feed them their favourite foods – pectins for acidophilus (Pectins are in apples and carrots, and many fruits and vegetables); inulin for bifidobacteria (in onions, chicory etc).

You can kill yeasts – in the gut with a teaspoon of sodium bicarbonate in water; or caprylic acid, Pau d’Arco, garlic, chillis. In the blood with cinnamon; in both with oregano oil.

Then you should put the good guys back in over time – for example, eat sauerkraut, raw, cloudy apple cider vinegar, unpasteurised cows’ dairy.

2013 has seen a watershed in research into gut bacteria, the microbiome, and what goes on inside your gut with the 800 or more different types of bacteria. 93 trillion inhabit your body; that’s a lot when you realize you only have 7 trillion cells! And if your gut flora are out of balance, a common occurrence, yeast infections and Candida albicans are just typical of the problems.

(Click here to read a review of Chris Woollams’ new book – The Secret Source of Your Good Health).

The results of roughly a dozen major studies appeared towards the end of 2014, following an American $173 million study lasting 3 years. Let me give you some of the conclusions:

It is easy to see how yeasts have taken a hold in the Western world. My Thai wife lives in a country with a trillion such microbes lounging on every street corner, but in a Thai diet rich in coconut (caprylic acid), garlic, chillies and bee propolis, her foods are natural controllers of yeasts and worse threats. Once upon a time in the UK, we ate raw honey, oregano, natural honey and cloves but now our diets merely help to propagate yeasts. High sugar drinks, snacks, fast food, alcohol, refined wheat; indeed any high glycemic food will feed the yeasts. And we live in high glycemic land in the West.

Go To: The ‘Rainbow Diet’ Book

Over the last 80 years several people have had theories about parasites and their cause of cancer. By and large they have been ridiculed. But why? Dr Hulda Clarke wrote a book, ‘The cure for all cancers’ in which she stated her belief that all cancers had parasites at their root cause; and that the growth of modern chemicals in our blood streams meant these parasites could avoid the need for a second host. Another who had a similar parasite theory was Dr Royal Rife back in the 1930s. He identified 40 or so viruses or factors at the heart of different cancer cells and even used some to infect healthy cells. Both these Doctors developed frequency devices to kill these infections and leave the surrounding body cells intact. Of course, the world often tends to come full circle. While they were rubbished in their day, the world now knows that some 20 per cent of cancers are caused by parasites.

Yeasts Cause Other Illnesses

Diabetes is a well studied disease. Arthritis is probably less clear. But recently research in the USA showed that taking cinnamon could – in about 25% of cases – significantly reduce the symptoms of both diseases. Why? Well one theory – although not proposed by the researchers, is that yeast infections eventually move across the gut lining and into the blood system. Every cell has large numbers of receptor sites on the cell wall, which it needs to function properly. In non-diabetics, insulin alights on some receptors, for example, to take glucose out of the blood and into the cells.

Research in 2014 confirmed this leaky gut problem for yeasts entering the blood stream.

Let us now refer to gut expert, the late Gerald Green. (And he was an expert. I have seen the letters he received from hospitals and microbiology units saying he knew more than they do). He believed even terminal cancer patients might be saved if the root cause of an unstable body, was an unstable gut and candida albicans.

He believed sufferers must immediately.

ELIMINATE THE FOLLOWING FROM THEIR DIET:

All cows’ milk products: milk, cheese, yoghurt, whey. And all cows’ milk derivatives (which are everywhere in processed food).

Nearly all fruit: overripe fruits are full of sugar and yeasts. Plus vegetables like courgettes, pumpkin, squash, marrow.

Personally, I would add all high glycaemic foods to this list, e.g. refined wheat, rice, pasta, fizzy soft drinks, fruit juices and squash, biscuits, pastries, pies and corn. Gerald mentions most of these too in his diet and he suggests you avoid all pulses, processed meats, high salt foods and hydrogenated vegetable oils too.

Below you will find his list of Good Food Choices.

His sweetener of choice is Stevia, a herb 100 times sweeter than sugar but a natural anti-fungal agent. But personally, I don’t like the taste.

He recommended astragalus and echinacea pIus 1 gm vitamin C daily to boost the immune system. (Gerald did a lot of work with cancer patients, MS, Crohn’s colitis and Lupus sufferers too). I think the liposomal variety of vitamin C is worth looking into – more expensive but 80-85% of the vitamin C gets into the blood strean, rather than just 7% of the normal high street varieties.

EAT PLENTY OF THE FOLLOWING FOODS:

Personally, I would add that garlic, caprylic acid, oregano and Pau DArco are all excellent yeast raiders and can be found in proprietary High Street brands from stores like Holland and Barratt. Good, old fashioned Sodium bicarbonate (a teaspoon in warm water on an empty stomach) first thing in the morning will also help. Top herb is WORMWOOD – it kills yeasts and certain parasites.

If you do think you have a parasite (picked up on holiday, or from exotic foods, sushi and the like), the natural compound par excellence that helped me personally when all the experts in Harley Street had failed was Neways Parafree, a purge that contains all natural ingredients and the things parasites hate.